It was not until 1999/2000 that any visitor facilities were available at Lyveden. Prior to that, visitors had to park off site (there was a small lay-by on Harley Way near the entrance), and walk up the hill to the cottage, a distance of slightly less than 800M (0.5 mile). On the gate at the cottage the visitor could ring a bell, and (if someone was there), pay an entrance fee in exchange for a ticket, and be offered a small handbook. If no-one was there to respond (which was probably normal during weekdays), they would be expected to put the entrance fee into an honesty box, and pick up a leaflet. From there, they would pass through another pedestrian gate nearby, and be left alone to follow the path to the New Bield. The handbook contained some basic information about Sir Thomas Tresham, and the significance of the building. The only information on the garden was a diagram showing the lodge in relation to the Manor at the bottom of the hill, and some of the garden features. In early 1990, the fence and gate around the Lodge were removed.

Mark recalls that when he started, there were no other facilities for visitors. “A couple of years later, we started selling ‘Criterion’ ice creams from the cottage at weekends in the summer. It was low key, and fairly ‘ad hoc’ in those days.”

Until the late 1990s, the property was closed completely from late October to Easter, and during the rest of the year, open Wednesday to Sunday inclusive. After that, weekend opening continued throughout the year, but weekday opening continued as previously. “Our daughter said only recently that she used to really look forward to coming home from school on a Monday or Tuesday because the property was closed, and she had the whole place to herself. She could ride her bike around, or go up and down on the track on a go-cart in complete freedom.”

It was probably 2005 when the opening times changed again, this time remaining open throughout the week.

Originally, access to the garage was through two large doors on the side of the building facing the cottage. These doors were removed, (and the resulting gap closed off), and a dividing wall installed to split the garage into two sections, The old doors were re-fitted at the back, to give access to that section for machinery and tool storage. New doors were fitted at the front, and that section became the new visitor reception. A toilet was also installed at the back of the reception section, this facility being intended for volunteer and visitor use alike. However, being located behind the reception desk, visitors were not aware of its existence unless they specifically asked. 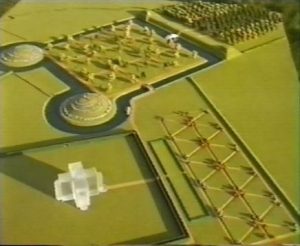 To help visitors to appreciate the garden that Sir Thomas had envisioned, a model was created to show the extent and features of the garden. This was displayed in the new visitor centre. Some of the features shown were based on what was thought to be Sir Thomas’s planned garden, but were later found to be incorrect. For example, the layout of the ‘Middle’ (or Moated) Meadow, is now known to be a circular feature (Labyrinth) rather that the square sections and straight pathways shown on the model. As a consequence, the model is now left out of sight in a storage area.

In 2003/4, part of the machine storage section at the back of the visitor centre was converted to provide a toilet intended for visitor use, with direct access from outside.

To the front of the original garage, and between it and the moat, was a much smaller ‘shed’ which was for many years used for general storage. When a second ride-on mower was purchased, one of the mowers was stored in this shed. This continued to be the case, until 2012, after the acquisition of the Manor, when all machinery and most of the tools were located in secure buildings in the Manor grounds. As a result, the previous tool store section at the back of the visitor reception was ‘cleaned up’ and refitted for use as a ‘family den’, and the small shed at the front used for sales of second hand books and plants.

In 2012, when the cottage was converted to a tea room, and the cottage garden was opened to the public, new doors were fitted at the side of the visitor reception giving access directly into the garden.

Various plans were considered over the years to move the reception facility to the car park area so that visitors would be ‘captured’ as they entered the site. In the interim, a shed was installed in the car park which was intended to be used during busy periods to alleviate some of the problems caused by delays getting through reception. This experiment was soon abandoned – it fell foul of planning regulations, (an enforcement notice was issued by the planning authority to remove the shed) and it was not popular with the volunteers who were asked to work there. The problem (where visitors can enter the site without recording their visit at reception resulting in a loss of revenue for the property) still exists today (2018). It can now be expected to be resolved with the eagerly anticipated opening of Lyveden Manor (the Old Bield) as the new visitor centre.

Following the construction of a Visitor Reception area, Mark had to recruit and rely on the support of volunteers to operate the visitor reception.

For the start of the 2000 season, “I remember quite clearly putting an advertisement out in the newspaper looking for volunteers. I remember picking up enquires that phoned through, and interviewing them on the telephone, before inviting them in for the first set of visitor reception volunteers.” A few of them were still volunteering there in 2012.

We were very dependent on these volunteers to greet our visitors, to make them feel welcome, and to provide information about the property. Their voluntary role is an essential part of our operations at Lyveden.

For a number of years, group visits to other local historic properties were organised as a ‘thank you’ to the volunteers. Some of the properties visited were Ruston Hall; Sir Thomas Tresham’s Tiangular Lodge; Boughton House where an original portrait of Sir Thomas is displayed; and Kenilworth Castle where a formal Elizabethan garden had been re-constructed. 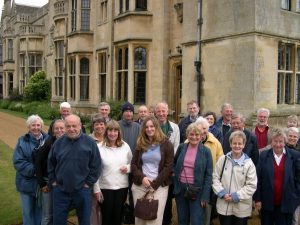 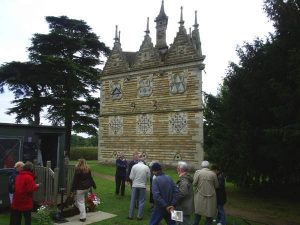 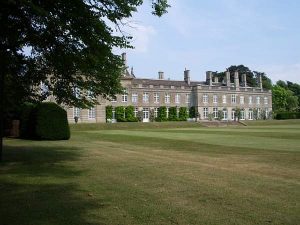 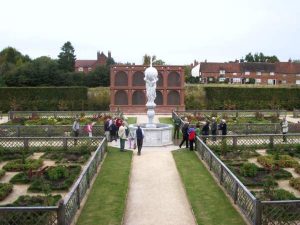 In the early 2000s, requiring visitors to park down on Harley Way, and walk up to the property was becoming a growing problem due to vehicle numbers, break-ins, and the negative effect on visitor numbers. At one point, a real spate of break-ins meant that a solution had to be found. For this reason, parking was allowed on the grass at the front of the cottage. Later, parking was also allowed on Oak Green, and (during busy periods) the area of grass used for the Parterre.

In 2008, a new access road and car park were created (see extending the garden). This finally resolved the car parking issues.

In 1995, visitor numbers for the year were in the low thousands, but they gradually increased year on year. By 2012, the property was recording numbers around 20,000.

Mark thought that these increases were down to a number of factors “which significantly increased the property’s profile”:

In 2010, an audio tour was complied to guide visitors around the site, and to provide more in-depth information as the tour progressed. This “really changed the way visitors understood the site with much more depth and understanding of its history.”

The audio guide was created “with the help of one of the country’s leading interpretation companies to produce a hour long audio telling the stories of Lyveden. As a visitor you are taken back in time to experience the Elizabethan age – sounds of stonemasons preparing stone for Lyveden, Tresham’s foreman giving orders, and music that evokes the elegance of Tresham’s master plan. The visitor can now experience the lodge and garden with voices bringing the story to life at each step of the way. Commentaries also by National Trust staff help to explain some of our recent conservation and exciting discoveries from new research”.