Lyveden New Bield is owned by the National Trust, and their website for this property, and their ‘the story so far‘ webpage provides general information about the property together with specific details for visitors.

The information provided on this website has been compiled independently of the National Trust, and describes the work that took place at Lyveden New Bield during the period 1995 to 2012 to rescue the Elizabethan Garden and improve the visitor experience. By the end of this period, the garden had been re-discovered and expanded to become one of the main features for visitors to enjoy. The story is primarily as told by two individuals: Mark Bradshaw & Bob Oakley whose work and dedication made it happen. Prior to this work being carried out, most of the Elizabethan Garden had been lost to undergrowth, and effectively ‘out of bounds’ for visitors to the property.

Further information was obtained from other individuals who worked at the property during this period, together with some information derived from the property’s Conservation Management Plan dated 2014. While care has been taken to avoid the possibility, it should be remembered that memories fade over time, and as a consequence, some information given could prove to be inaccurate. This report should be considered ‘informative’ rather than ‘factual’.

Situated in East Northamptonshire, Lyveden New Bield dates from the late 1500s, and consists of a Garden Lodge (Scheduled Monuments grade 1 listed in 1987) and a Moated Garden (grade 1 listed – Register of Historic Parks and Gardens). The property was built and developed under the instructions of Sir Thomas Tresham. Both the building and the garden were still under construction when, in 1605, Sir Thomas died and work on the project ceased.

Over the following centuries, ownership changed a number of times, and although it is believed that some plans were under consideration to continue work on the Lodge, there is no evidence of any further work actually being undertaken. However, in the late 17th century, a cottage was constructed, probably using the stonework already on site for completing the Lodge. Eventually, that cottage became the home for the custodian, and in 2013,  tea room and offices.

Sir Thomas Tresham’s Lyveden estate had been carved out of the vast Rockingham forest, to become an oasis of peace surrounded by woodland. Remarkably, apart from the removal of floor timbers, the incomplete Garden Lodge survived the ravages of time to remain almost as it had been when work stopped. The Elizabethan Garden had not fared so well. A lack of interest by the various owners meant that little had been done to preserve the garden, parts of which reverted to scrub. Undisturbed, the garden was generally left to the forces of nature.

In 1920, the property was bought by public subscription, and in 1922, was donated to the National Trust. The area included the Garden Lodge, the nearby cottage, and the main garden features as shown inside the red dashed lines on the following map (Map 1) – click image to enlarge. 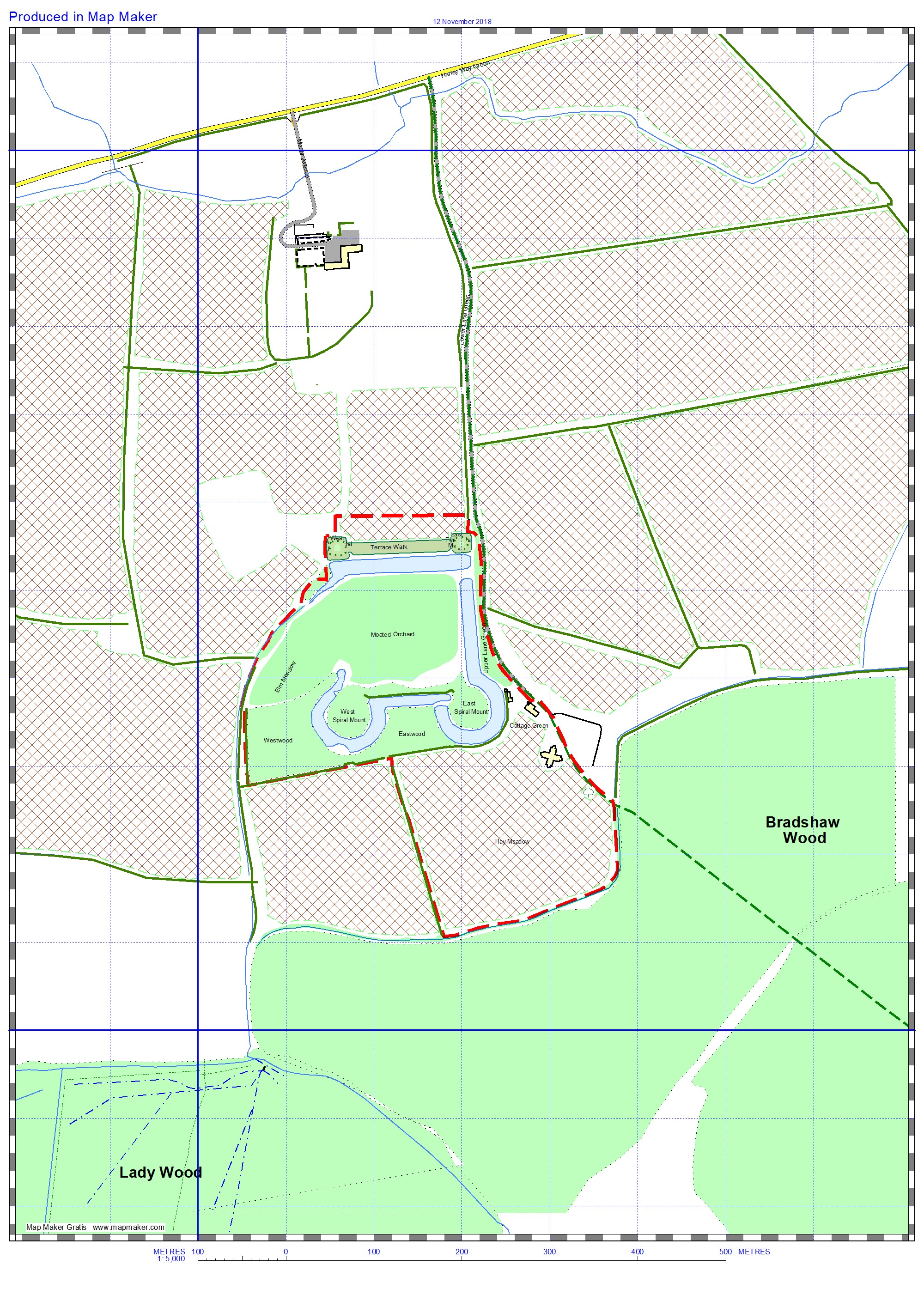 To the east of the Lodge was a scrubby parkland area known as Bradshaw Wood. By the early 1990s, this area had also been cleared for arable use.

The track and bridleway from Harley Way is the only access to the property. The bridleway continues beyond the cottage, passing very close to the front of the lodge and on to Bradshaw Wood.

The area owned by the Trust in 1922 (shown on the map above) totals a little over 11 hectares (27 acres). Just under 6 hectares (14 acres) of this was leased to Barnwell Estates as described above.

The original version of the map was created in 2008, primarily for the use of volunteers working at the property. The map was regularly updated to include new areas as they came under the Trust’s management control. The names shown on the map for various features and areas, and used throughout this document, were based on names already in general use, or because of their location. For example, ‘Bradshaw Plantation’ and ‘Bradshaw Green’, are located in the area known historically as ‘Bradshaw Wood’. All the other names were chosen to help identify the location, and to reflect the way it was maintained (at that time – 2008). For example:

Depending on the source of information, three locations/features are sometimes (confusingly) referred to using different names. These are:

As the owner of the surrounding land, the Duke of Gloucester had a major influence over what could be done when recovering the Elizabethan garden. Mark Bradshaw points out that “The Duke is a local man whose family had a long association with Lyveden, and as an architect and historian, he was quite appreciative and understanding of what we were trying to create here.” However, there were times when disagreements arose, particularly with the Land Agent, and many hours were spent trying to resolve these issues amicably. During these discussions, Mark was able to draw on the historic evidence provided by aerial photographs, these photographs having recently been discovered.

Some of those aerial photographs were taken by a Colonel Brown, who also carried out a survey of the property in the 1930s. These, together with a 1979 survey by Brown & Taylor (not the same Brown), helped to confirm the extent of the garden and some of its design features. Compared to what could be seen on the ground in 1995, they also demonstrate how much of the paths and garden design to the north of the lodge has been lost to ploughing.

It was much later (in the late 1990s) that an aerial photograph (originally believed to have been a Luftwaffe reconnaissance image) came to light. This image taken in 1944 (now believed to be an RAF image, but continues to be known as the ‘Luftwaffe photograph’) has proved to be an invaluable confirmation of the existence and location of certain garden features. In particular, at that time, the Labyrinth and Parterre were clearly visible from the air. Unfortunately, from the mid 1970s through to the early 1990s, some of the land within the Trust’s boundary and the surrounding fields and woodland came under pressure for agricultural production. Clearing and  ploughing resulted in the loss of the visual evidence shown on the ‘Luftwaffe photograph’ (labyrinth, parterre and orchard) being lost for all time. However, this setback is as nothing compared to an even greater devastation of the garden that was proposed by one individual known locally as ‘mad’ Jack Robinson. He was living in the Manor House at the time, and his suggestion was to bulldoze the terrace and four mounts back into the moats to create even more land for farming! Fortunately, the National Trust rejected this proposal. 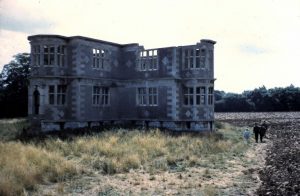 This image (taken in the 1950s/60s) demonstrates how agricultural activities together with the Lodge’s unkept immediate surroundings, had diminished the grandeur of the building, thus giving the appearance of a forgotten ruin.

1978 saw the creation of the ‘platform’ and ditches surrounding the Lodge. As part of those changes, the bridleway that had previously run close to the front of the Lodge was re-routed around the new platform together with the extended access track. In fact, a diversion order for the bridleway was never issued (“one of those things that was intended, but due to a change of Land Agent, or something, was never implemented”). As a result, current OS maps still show the bridleway passing close to the Lodge, and anyone has the right to take their horse and cart from near the cottage on a fairly straight line to the point where the track turns east towards Lilford Wood. They have that right, but may encounter some difficulty negotiating across the ditch near the oak tree! 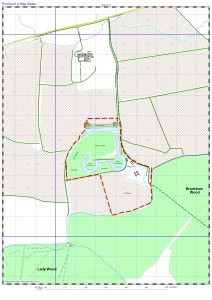 In order to construct the platform around Lodge, discussions were held with the Duke of Gloucester to acquire a small parcel of land  to the north east of the Lodge, and to agree access rights. Agreement was reached, and the Duke gifted the land to the Trust. As part of that agreement, the Trust undertook to extend the track from the cottage to the property boundary with Bradshaw Wood.

Map 2 shows the area of Trust ownership after the Lodge platform construction in 1978. The ownership areas were then slightly different – 11.6 hectares (nearly 29 acres) of which Barnwell Estates had a lease agreement covering 5.3 hectares (13 acres). Note that the new platform was made slightly smaller than the original raised plinth, with the new track running along the inside edge of the original plinth, and the new platform fitting inside the new track. Note also, that on our map, the bridleway is shown following the track around the platform, which is not strictly accurate.

We are fortunate that Bob Oakley made a number of video recordings during the 1996-2001 period, and that we have had access to these recordings in support of this story. All the video clips used on these pages were extracted from those videos, together with a number of images. (The quality of these recordings may not be what we have all become used to 20 years on, but visual information, photographic and particularly video, helps brings the story to life.)

In addition to Bob’s video, photographs are used to help understand the changes that took place in order to uncover the garden. Most of these photographs were supplied by Mark Bradshaw. The following group of images were taken in 1996, and demonstrate the initial condition of the garden – identifying where some of these were taken from can be quite difficult! (Note that most of the images on the pages of this report can be enlarged by clicking on the image.) 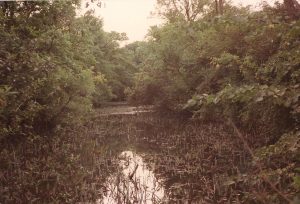 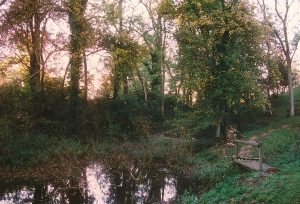 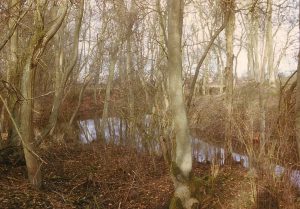 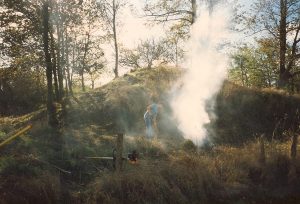 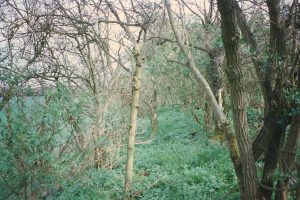 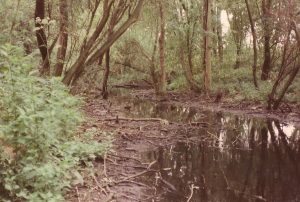 We have endeavoured to ensure that the information provided in this report is accurate and complete for the relevant period (1995 to 2012). If (or when) we are made aware of any errors or omissions, we will be happy to amend these pages accordingly. If you, the reader, can supply that additional information, please email mike@lyveden.org.uk.