From as early as 1996, Mark realised that the limited funds available for the property meant that in order to undertake the work he planned, he would need to raise funds locally to supplement the income from visitor fees and the financial support available from the National Trust. The situation was potentially made worse by the intention to terminate the lease agreements with Barnwell Estates which were producing income which would be lost. The problem was further exacerbated by the plan to extend the area within Lyveden’s control by taking on the cost associated with acquiring a lease on some areas that were considered part of the historic Lyveden setting.

It became clear that Mark would need to put a significant amount of effort into raising additional funds. This would be essential to enable more and better equipment to be available for site maintenance, and to provide for planting materials, and fuel etc. Mark points out that “Raising funds for this work was a continual problem. In 2000, these funds covered the costs of dredging the moats.” He estimated that “£500,000 was raised in the first 10 – 15 years.”

A number of grants were available which were, or had been, successfully applied for:

The LEADER programme (an acronym in French meaning Links between actions for the development of the rural economy) is a European Union initiative to support rural development projects initiated at the local level in order to revitalise rural areas and create jobs. (This definition supplied by GOOGLE.)

In Lyveden’s case, the scheme helped to fund the new access road and car park (£100K) and the Cottage conversion to a tea room (£70K).

The Property was also fortunate to receive a few legacies, (one of which was used to purchase the second mower in c2004), and donations from individuals, and the National Trust local centres and associations.

While the above grants and donations provided significant help towards the costs, further fund raising was undertaken by Mark. This work had a secondary (equally important) benefit of widening the public’s awareness of the Lyveden property:

It was probably in the summer of 1999 (or 2000) that the property held its first ‘open gardens’ event. By that time, visitors could actually see the outlines of moats and mounts. Mark’s family always came up for these occasion – grandpa did the washing up; mum and aunt baked and served the cakes. The event took place in the cottage garden on four Sundays in the year. “Visitors could follow some of the recently created pathways cut into the scrub, and could then see the features of the site – moats and mounds. “We felt very fortunate to get reports in the local paper about these event which used to bring visitors in their hundreds, rather than the normal trickle of visitors. There’s a picture of the lay-by on Harley Way full of cars, which were also parked along the side of the road for some distance. [Note. This photograph was taken in 2006, but is an example of the parking problems at that time.]

“Unfortunately, there were some dismissive reports in the paper. In particular, there was one letter printed in the Stamford Mercury which was quite hurtful. The letter was entitled ‘gardens, what gardens’ – and continued ‘we went to Lyveden on the promise of seeing gardens and the restoration of a garden, and all we saw was mounts, scrub, woodland and some moats.’ Obviously, that visitor didn’t understand the significance of what was there, or appreciate all the toil and effort that had been put in to get the garden to that point.”

In 2001, 2002 and 2004, ‘New Bield Challenge’ events (involving teams of 4) were held to raise funds, but also as a means of increasing local people’s awareness of the property.

A programme for the event was produced, in which the rules for the various ‘tasks’ (games) was printed, together with score sheets to be completed by the team, and approved by the scorer in charge of the task. Each team was required to complete all tasks within a set time, or suffer penalties.

Most of the tasks were held on Cottage Green, with some of the shooting events being held on the Sheep Field, and the Orchard.

“We typically had 15 or so teams, each being a group of friends or work colleagues. Each team paid an entry fee of £100, and the winning team received a trophy.

“It was all very good natured, with plenty of friendly rivalry. The event that I remember most vividly was the human sheep dog trials. For this, three of the team members each wore a T-shirt, with a name on the back (eg. ‘flossy’ or ‘shep’) and wore a blindfold. The fourth team member was then required to stay at the start, and call instructions to his/her ‘flock’ to get them through an obstacle course of straw bales, and finally into a coral.

The ‘Bridge Challenge’ was also a memorable task, but probably for the wrong reason. A member of one team broke his arm when the bridge they constructed collapsed under the weight!”

In the evening, we held a ‘sundowner’ event to include a hog roast. This was a ticketed event, which was open to the general public as well as the contestants and their friends/family.

While a fairly profitable event (raising some £3000), it involved a great deal of time over many months to plan and implement. “It was probably around 2000 when we started doing weddings. Initially, couples would come to use the New Bield and its immediate surrounds as a backdrop for a photo shoot on their wedding day.” The venue proved very popular, and since c2012, some couples took the opportunity to hold their wedding reception on the site. For these occasions, in exchange for a fee, the couple would be permitted to hold their event on Oak Green, and have use of the car park. They would hire/arrange their own ‘accommodation’ (typically a marquee), and catering facilities etc. 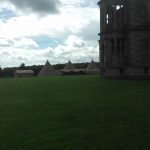 The marquee example on the right (sorry about the photo quality) is probably one of the more unusual ones seen at Lyveden! 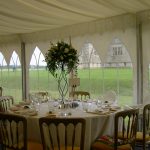 A more traditional example is shown on the left.

Over the years, a number of theatre events were organised. They had the distinct advantage that once a date for the event had been agreed, the Trust could leave the planning and execution to the group presenting the show. Our role would be to promote the event, and manage parking, crowd control and refreshments. Examples of events held were:

August 10th, 2003, saw the first major outdoor production staged at Lyveden. The property was a backdrop for a presentation of Shakespeare’s play Henry V by the touring group ‘Mad Dogs and Englishmen’.

A press release issued to promote the event stated that ‘As an Elizabethan property, Lyveden provides the perfect setting for a Shakespeare production, presented against the silhouetted backdrop of Sir Thomas Tresham’s garden lodge and the adjoining romantic 16th century garden. Mark Bradshaw, Property Manager for the National Trust explains that ‘Lyveden was built at the time Shakespeare was writing his works and contains much of the same allegory as Shakespeare’s plays. A further link is that Sir Thomas Tresham’s great-grandfather actually served as Attorney-General to Henry V, so together the performance will provide a most ideal setting and experience.’

‘Tickets are available from the National Trust box office on 01909 511061 or from Lyveden New Bield on 01832 205358, tickets priced £7.00 in advance and £9.00 on the gate with concessions for children. The performance begins at 6.00pm and gates open at 4.30pm. With parking close by, bring your own rugs or chairs, and why not enjoy a picnic in the beautiful rural surroundings.’

The following photographs from that event indicate that the weather was not at its best for an August event. Men in suits of armour waving swords about is not recommended when a thunder storm approaching. One or two unscheduled intermissions were necessary to wait while the storm passed, before eventually (if memory is correct), the event was abandonded. The advice in the press release to bring warm clothing and blankets turned out to be most appropriate. On 27th June 2004, another Shakespeare play presented by ‘Mad Dogs and Englishmen’, and billed as a ‘superb comedy drama’.

Staged by ‘Watch this Space’ on 5th and 6th November 2009. The lanterns lining the route from car park to the cottage were made by local school children, who also provided some of the cast. As you might expect, Gunpowder Plot should finish with a bang! On 1st July 2012, a ‘The Pantaloons’ presentation brings Grimm’s Fairy Tales to life.

While the New Bield Challenge was probably the most profitable fund raising activity, weddings were the most effective in terms of ‘return for effort’.